The Global Precipitation Measurement (GPM) constellation of spaceborne sensors provides a variety of direct and indirect measurements of precipitation processes. Such observations can be employed to derive spatially and temporally consistent gridded precipitation estimates either via data-based retrieval algorithms or by assimilation into physically-based numerical weather models. We explore the performance of the data-driven Integrated Multi-satelliE Retrievals for GPM (IMERG) and the NASA-Unified Weather Research and Forecasting (NU-WRF) model for extreme rainfall monitoring over the southeast United States, based on an object-based analysis framework which decomposes gridded precipitation fields into separated storm objects. As an alternative to conventional “grid-by-grid analysis,” it provides a promising way to diagnose spatial properties of storms, trace them through space and time, and connect their accuracy to storm types and input data sources. This object-oriented view can enable deeper insights into satellite precipitation performance and highlight the potential for “hybrid” data-based and physics-driven estimates. 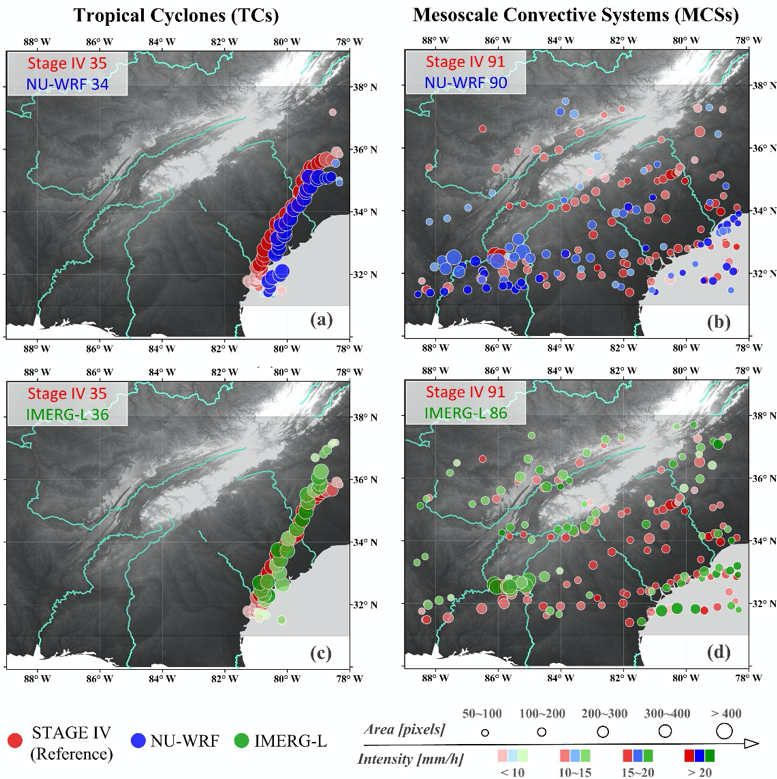 NASA’s GPM and its predecessor TRMM have revolutionized the way we observe precipitation processes and have facilitated the 20-year development of multi-satellite global precipitation products such as IMERG. Despite the advances that have improved the coverage, accuracy, and resolution of these products, their usefulness in applications is still limited by the lack of insight into the structure of errors and the inability to clearly articulate these errors in ways that can benefit a wide range of end users. This has been particularly challenging due to limitations of accurate “ground truth” data such as rain gauges or gauge-corrected ground-based radar, since such reference measurements are lacking in precisely the locations that could benefit most from the satellite precipitation estimates. In this ongoing research, we hypothesize that the dual-frequency radar (DPR) aboard the GPM core observatory can be used in place of ground-based observations—which would facilitate error estimation of IMERG at a global scale, and aim to develop a “prototype” global error estimates for IMERG based on the Censored Shifted Gamma Distributions (CSGDs) statistical modeling framework. Stay tuned!